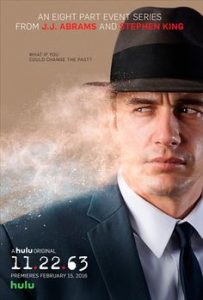 I’ve always found Stephen King to be an amazing writer. His ability to craft a story is like no other. From horror to sci-fi to any genre he feels like. After reading Under the Dome, I was really excited for the supposed 10-part series on CBS. Then it had to suck AND be super popular, so they made two more seasons of dreck. Thanks, CBS.

It was with great apprehension that I approached the new Hulu series 11.22.63 based on the King novel. The plot is about a guy who is shown a portal by a friend that takes the traveler to 1960. The friend suggests they attempt to save Kennedy from the assassination in 1963. Well, the past don’t like to change too much, I reckon.

I’m about half way through the 8-part series and it’s really good. Much better than I was expecting, and actually feels like a Stephen King story. James Franco and the rest of the cast is perfect.

If you have Hulu and like Stephen King or rewriting history, you should check this out.