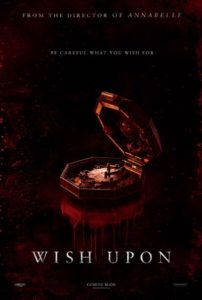 A dumpster-diving father (Ryan Phillipe) finds an ornate Chinese box and gives it to his daughter, Clare (Joey King), as a gift. Little does she know, the box grants its owner seven wishes in exchange for a blood price. In other words, with every wish, someone dies.

It’s kind of a Wishmaster meets Final Destination movie, and it somehow works out even though the movie is a series of missteps. Some of the acting and dialog were laughably bad, but it managed to fit in rather well. There was a certain charm and wit that kept the movie from totally sucking.

I liked the pacing and the ending the most. It never felt too long and the movie ended the most natural way possible.

Wish Upon will never end up making anyone’s top ten list, but it was better than 50% of the horror movies out there, and that’s saying something.