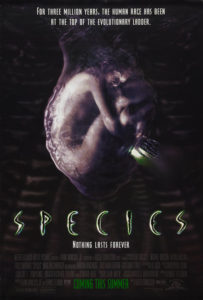 As a teenage boy, this movie had everything. Blood, aliens, and boobs. The story starts with a prologue implying that S.E.T.I. picked up on some alien radio transmission. It then dives straight into the action with a super human teen girl escaping from a government research facility. The head of the facility, played by Ben Kingsley, assembles a team of scientists (and a hitman) to track down the girl who is revealed to be an alien/human hybrid.

The girl turns into some goopy cocoon thing on a train and comes out as Natasha Henstridge, a.k.a. SIL the hot alien chick. Her primary motivation for the rest of the film is to find a suitable mate and breed or kill trying.

The alien was created by H.R. Giger, the twisted mind behind the original xenomorph of the Alien movies. It’s not until near the end that you get to see the actual creature in full glory, but when you do, it’s pretty unsettling. And then it birthed an alien/human baby thing (Spoiler alert?).

A lot of the little twists and turns the story takes were not exactly revolutionary, and the super smart scientists all come off as really dumb. For example, SIL fakes her death using a body of a lady she kidnapped and her own chopped off thumb as a decoy. The scientists test the thumb, which was found away from the burnt car, and match the DNA, leading them to believe she died in the fiery car explosion. What about testing the charred remains of the body? Can that not be done? I feel like they would have been able to put out the fire fast enough to leave behind some DNA material to test (hello? bones?). If not immediately, they could have revealed the test later, like when they are all partying for a job well done. “YEE-AH! We did it! — oh, what? The body DNA didn’t match… ok, back to work, boys.” Instead, the Forest Whitaker “empath” character starts having the feels that she’s not dead and the Michael Madsen hitman character’s gut senses something is not right.

It’s a fun horror/sci-fi popcorn movie, but just enjoy the boobs and turn off your brain.

Available for streaming on Hulu and Amazon Prime