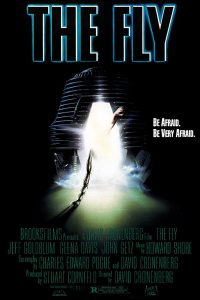 From the twisted mind of David Cronenberg comes this 1980s remake of the 1958 Vincent Price classic. Jeff Goldblum plays Seth Brundle, a scientist who has invented teleportation. Geena Davis is the journalist who meets him at a party and wants to write a story about Brundle’s invention after seeing a demonstration.

Things take a frightening turn when Brundle goes into his own teleporter, unaware that he’s accompanied by a house fly. At first, he’s overjoyed that the teleportation worked, but then he starts changing in increasingly grotesque ways.

Goldblum and Davis have great chemistry and both deliver great performances of characters with actual depth. The FX and makeup sell the horrific transformation of Seth Brundle into the Brundlefly, and won an Oscar for Best Makeup.

Even after 32 years, this classic holds up. It’s gory, character-driven, and never slow. Plus, how can you not love Goldblum?

Currently available to stream on Hulu